A long-term perspective of the Dow Jones Industrial Average since 1896 reveals that there are extended periods of time in which the U.S. equity market will trend generally higher, and also lengthy periods of time where the market will instead stagnate or move generally lower.  There have been eight such alternating cycles since 1896, with each averaging 14 years in duration.

The chart below depicts these structural trends over the last 120+ years on a logarithmic vertical scale.  At first glance, it appears that we may now be in the early stages of the ninth structural trend - a bullish, upward market.  Or, is it merely a continuation of the bearish trend that began in 2001?  Time will tell.

Let’s say an individual begins to accumulate meaningful wealth with which to invest around the age of 40.  Assuming a life expectancy of about 85 years, a typical investor will likely experience three of these cycles during his or her investing lifespan.  With this in mind, it is important to have at one’s disposal strategies that are effective in both generally rising (bull) markets and falling (bear, or “fair”) markets. 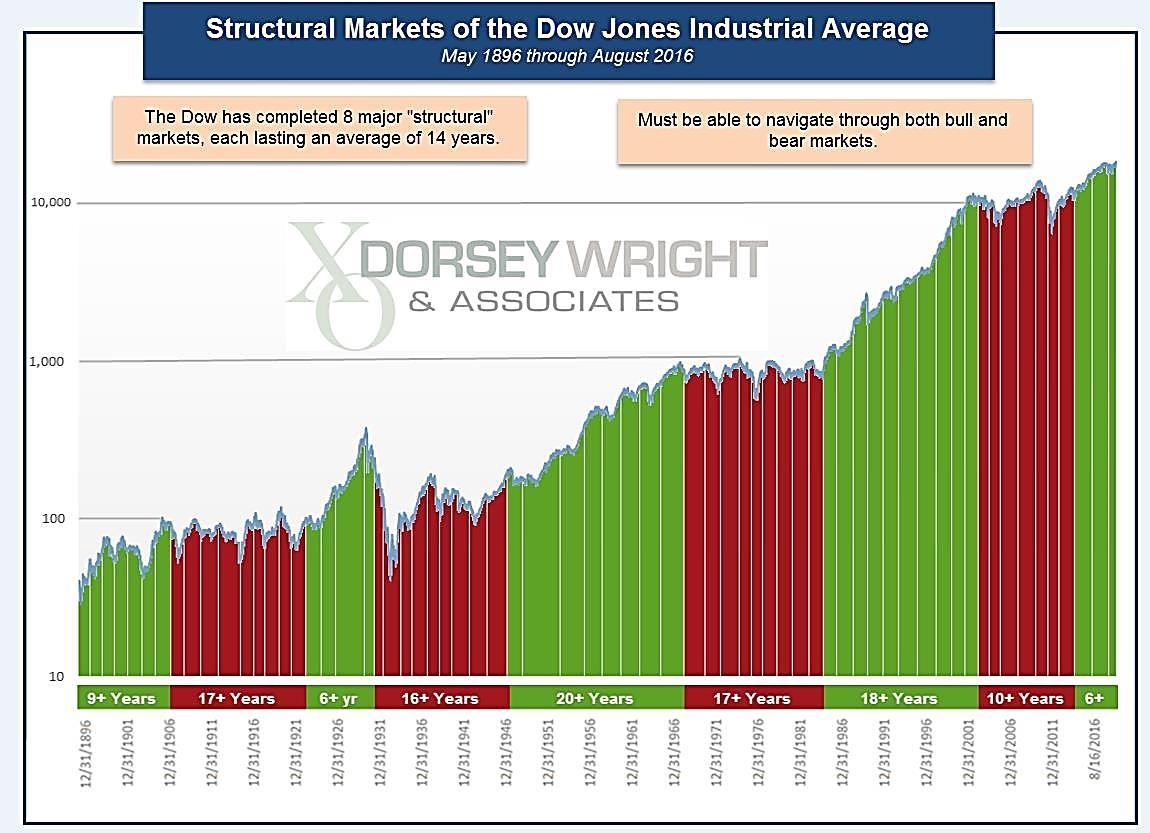 How does one navigate these differing market conditions?  One methodology that has existed since the late 1800s and has been proving effective in both kinds of markets is that of the Point and Figure analysis.  The first proponent of the methodology was Charles Dow, also the original editor of the Wall Street Journal. Charles Dow was a fundamentalist at heart, yet he appreciated the merits of recording price actions and understanding the supply and demand relationship in any investment.  The Point and Figure methodology has developed over the past 100+ years, but remains at its core a logical, organized means for recording the supply and demand relationship in any investment vehicle.

As both consumers and investors, we are innately familiar with the forces of supply and demand; they are, after all, the first subject introduced in any Economics 101 class, and we experience their impact regularly in our daily lives.  We know why tomatoes in the winter are not particularly tasty, do not have as long a shelf life, and are paradoxically more expensive than those sent to market in July.  What many investors are slow to accept is that the very same forces that cause price movement in the supermarket also trigger price movement in the financial markets.  When all is said and done in a free market of any kind, if there are more buyers than sellers willing to sell, the price will move higher.  If there are more sellers than buyers willing to buy, the price must move lower.  If buying and selling are equal, the price will remain the same.

By charting this price action in an organized manner we hope to ascertain who is winning the battle:  sellers or buyers, supply or demand.  By having the ability to evaluate changes in the market, we have taken the first step toward also becoming responsive to both bullish and bearish periods.