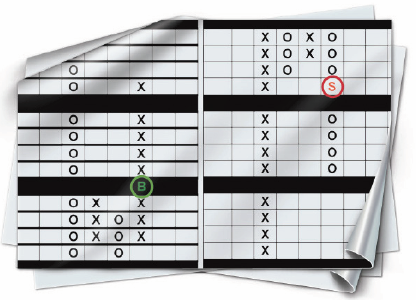 We Have Entered the Seasonally Strong Half of the Year

With the start of November, we have officially moved into the “seasonally strong” half of the year, which lasts from November through April.  We are all familiar with the saying "sell in May and go away," which conjectures that we would do just as well to sell all of our holdings as we would be by staying invested in the stock market during the months of May through October. Typically, conjecture doesn’t mature into adage without basis in reality, and market seasonality is just such an example as it has shown an impressive trend in terms of magnitude, consistency, and longevity.  We’ve discussed seasonality many times over the years and as we switch between seasonally biased periods, we wanted to revisit the subject today.

Years ago, Nasdaq Dorsey Wright began using the reference tool, Stock Trader's Almanac, published by Yale Hirsch.  For years they have found it to be a fantastic source of information on the stock market, so much so that they always order a number of copies for their office each year (If you would like a copy you can visit www.stocktradersalmanac.com).  The premise of the "Market Seasonality" study is essentially that, historically speaking, the market performs far better during the November through April time period than it does from May through October. On its own, that isn't a particularly profound statement, however, when we examine the magnitude of this effect over the years its significance becomes clear.  Consider this: if you had invested $10,000 in the Dow Jones on May 1st and sold it on October 31st each year since 1950, your cumulative return would be only about $1,500.  Meanwhile, the same $10,000, invested only during the seasonally strong six months of the year, would now be worth over $1 million! Put another way, almost all of the growth of the Dow Jones Index since 1950 has effectively been during "good" six months of the year.

In the graph below we have reproduced the Six-Month Switching Strategy, first published in the Stock Trader's Almanac, beginning in 1950 based upon the Dow Jones Industrial Average.  The green line reflects the May 1st through October 31st period, while the red line shows November 1st through April 30th.  You will note that a theoretical $10,000 initial investment in 1950 is barely on the positive side when invested only from May 1st through October 31st.  On the other hand, an identical $10,000 initial investment grew to more than $1,020,000, with an average annualized return of 7.03%, if invested only from November 1st through April 30th each year. 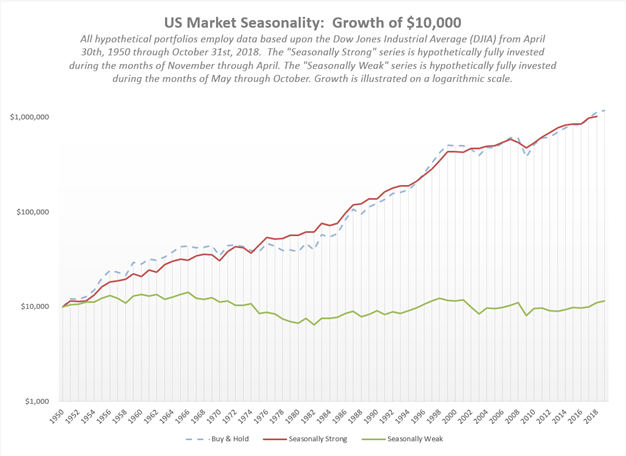 There's no question that the November through April period has provided substantially better returns.  Whether you average it out, annualize it, compound it, or complicate it further; there is clearly a wide spread between the average six-month returns during these contrasting seasonal periods.

Obviously, this study is not a sophisticated tool for risk management, but it is interesting and does expose a bias within the market that many investors are not aware of.  As we mentioned above we are coming off the seasonally weak period in the market which saw the DJIA produce an above-average gain of 3.94%.  Despite the recent volatility, US equities remain the number one ranked asset class according to the indicators we follow and we have seen some encouraging signs in recent days.  We are now entering what has been the traditionally strong period for the market, and while this does not guarantee that we will see a strong equity market over the next few months, it does provide an opportunity to consider seasonal strategies that can position portfolios to take advantage of these historical biases. 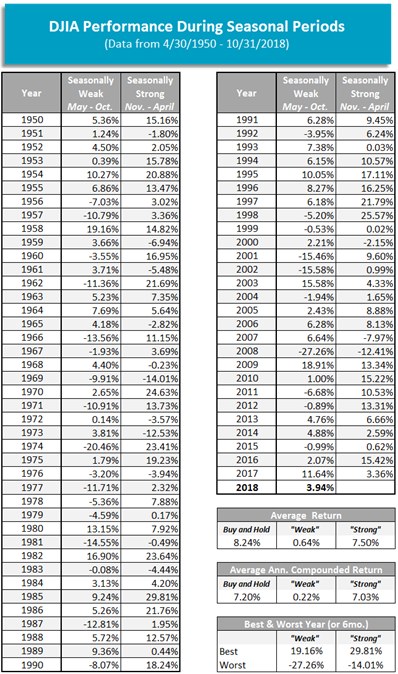 *All return data is based upon the Dow Jones Industrial Average (DJIA) from April 30th, 1950 through October 31st, 2018.  The "Seasonally Strong" returns are based upon investment during the months of November through April (of the following year).  The "Seasonally Weak" are based upon investment during the months of May through October.  The performance numbers above are pure price returns, not inclusive of dividends or all potential transaction costs.  Investors cannot invest directly in an Index.  Past performance is not indicative of future results.  Potential for profits is accompanied by possibility of loss.